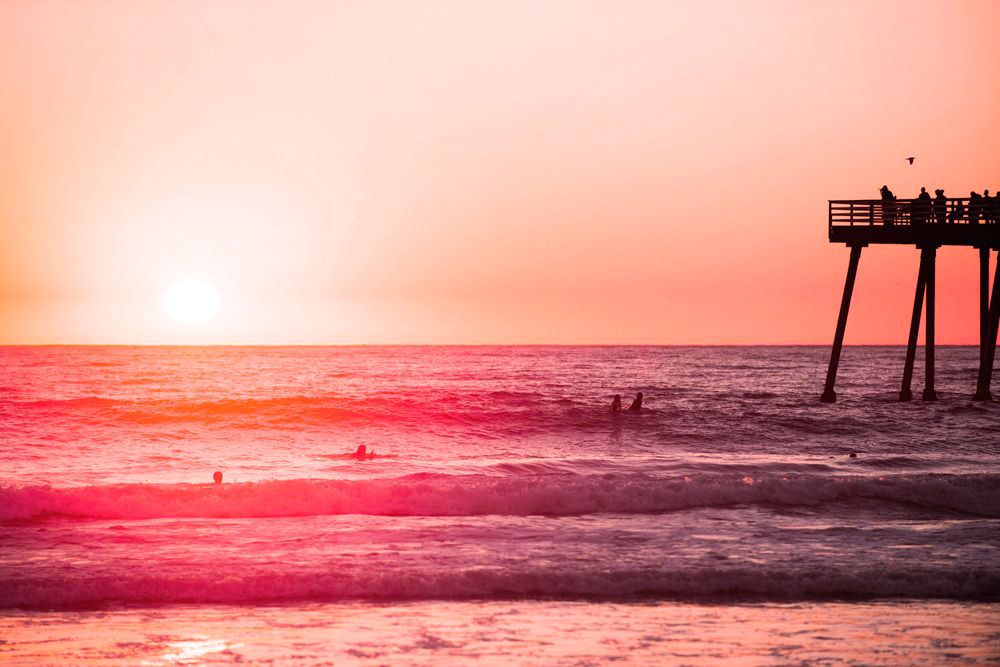 The sand, the salt and the sea

· My surfing trip to Cabpreton, France · 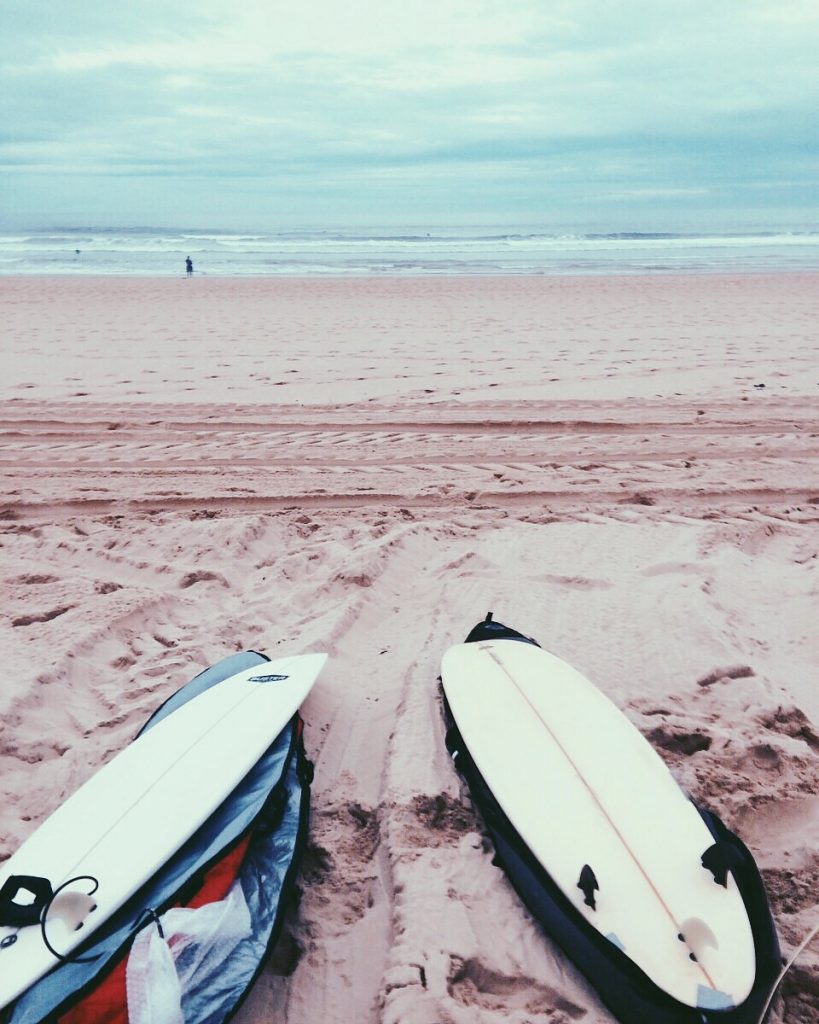 Processed with VSCO with p5 preset

This trip has been by far one of the best experiences I’ve ever had.

Lucky me – I had some friends who went surfing to France several times a year. I remember when I was a child I was watching some australian series on the TV and I always wanted to go surfing. So in 2015 I took the chance when my friend asked me to drive about 1.500 kilometres to go surfing with him and some friends with kids. I’ve never heard from Cabpreton or Soorts-Hossegor before, but as soon as I had searched for it in the world wide web I realized that Soorts-Hossegor is one of the most popular and famous places to surf at the atlantic coast.

Simple answer: Because we took the surfboards with us. Our friend was an excellent surfer and he already taught his three children how to do it. So we already had the equipment and the teacher. Yes! I just had to buy a wetsuit. I found a very good deal and bought a long PiPe Wetsuit 3mm at https://www.sports-box.de/. So if you are looking for wetsuits I can really recommend this online shop.

I love roadtrips! And I love driving and listening to music at night. So we packed our stuff and made some CDs for the trip. Our ride was only able to play CDs but honestly, how cool is that? You have plenty of time – about 15 to 20 hours – to listen to your favorite records. When you listen to a whole album from Track 1 to Track 10 (more or less) you really get the feeling of the music. It is like the soundtrack of your journey (I also made a list of albums I loved listening to while we were on the road for 16 hours). Not only it fills the silence it also gives you something to discuss about. We were having a really long conversation about the german rapper Bushido and which influence he had not only on the music business, but also on a whole generation and politics. And I got to know better the sound of my favorite band the Foo Fighters. I saw them twice live once in Germany an “Rock im Park” in Nuremburg, Germany and once at a concert from the “break a leg”  tour in Vienna, Austria. They just released their new record “Concrete and Gold” by the way – recommend this! Rock’n’Roll! 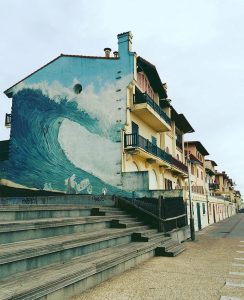 Well, back to the trip. I am really sorry, but I have no Idea what amount of money I spend for the trip. I literally can’t remember. We didn’t book anything, we just drove spontaneous to Cabpreton and went to an agency. The first appartment they offered us was . . . shit. I was not only dark and very, very tiny – It was also so dirty and the smell was really unique – a mixture of wet clothes, sea-salt, seaweeds and cheese. As I tried not be a princess I didn’t say anything but thanks god my friend did after we took the appartment. We gave the keys back and the guy from the agency told us that he will have another one in two hours. It was eight in the morning and we decided o wait until ten and went to the beach meanwhile. Our friend and his family has already arrived and we met at a café.  Everything in Cabpreton looks like it’s made for surfers that is so cool. The Surf Shops, the bars, the restaurants – everything. The beach in front of the agency was one of the surf spots in Cabpreton, but the waves haven’t been that good at this spot during our stay so we’ve  never surfed there.

At eleven our guy from the agency finally had an appartment for us and it was a dream. A white, wooden room with a porch and ocean view and a gallery bedroom. Amazing. When we had breakfast we could always check out the surf spot and watch the sunrise above the ocean. It was a magical view.

In one chapter of my book “muse – How to Create Your Own Happiness” I wrote about this view. I had some serious thoughts while looking at the atlantic ocean and I was so grateful. I used this trip to prove myself and anyone else that I am not a whiny princess, that I can take pain and stress without moaning and that I am enriching. It was a super cool trip. We went to different surf spots by car and checked them out. The ocean was perfect for beginners and we had so much fun!

They forgot to tell me one of the first rules of surfing: Never lose your surfboard !!!

While learning how to jump over the waves or dive under with my board I got hit by a wave several times. Didn’t know whether I was facing the ground or not so I accidentally lost my board and it hit me right in the face! #facepalm

Afterwards the guys told me that I should never lose my surfboard because it could hit me or others and that’s pretty dangerous. Newsflash.
I laughed about it and I never thought that I would have so much fun. The next days the weather went from 35 degrees celsius down to 21 degrees, the wind blew heavy but the ocean was still just right to go surfing. After 30 minutes it became warmer to stay in the water than outside and I spent hours trying to catch a good wave and to stand up on the board. We spent two weeks in Cabpreton and we could go surfing at least ten of them I think. It was totally up to mother nature and the ocean to give you a good swell and after the sun went down and we packed our stuff and left the beach we turned around, looked at the ocean and just were grateful. “Thank you.” This was the last thought of everyday at the beach.

Watching the sun go down while sitting on a surfboard next to others surrounded by the ocean who probably all feel the same power and freedom is an unbelievable feeling. You can’t describe it. It just makes you feel so little and so unimportant comparing to this power of the nature and the whole universe  and all your troubles and issues seem to become so ridiculous bullshit. You are just happy and thankful to be alive and part of something so beautiful and magical. 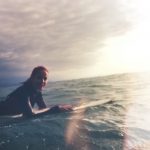 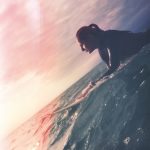 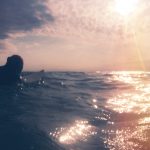 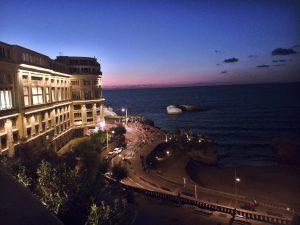 When our friends had to bring their kids to bed and tell them bedtime stories we went for some drinks to a place in Cabpreton near our appartment where you could meet all the legendary surfers and their boards were tied up to the walls and ceiling and you saw photographs and autographs framed at the walls. It was so cool there. Even to be there makes you a member of this group. They were so nice and kind and peaceful and everybody just wanted to have a good time.
The other night there happened to be an Open Air and I can remember one evening we spent at a bar in the centre of Soorts-Hossegor. Not that you could get bored at anytime but we still wanted to move around so we packed our stuff after one week and drove to the spanish border. We passed Biarizz were we spent one night at a hotel and reached San Sebastian in Spain where we spent another hotel night and then back to Cabpreton and stayed there the last days. 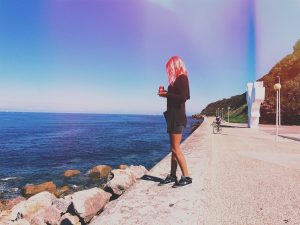 After fourteen days we returned to Munich, Germany and back to our lives. I promised myself to go on a surfing trip as soon as I can, again. Until today this was my first and only one but I’ve seen other beautiful places and it’s on my bucket list. Soon the next point on my list will be done: In San Sebastian we went on a random hill to catch an amazing view and on our way I found something. A rock with a yellow shell painted on it. We walked a part of the ‘camino de santiago’ by accident. Since I am learning spanish and love to wander I’ve always wanted to walk the whole way from France to Spain or the other route starting from Portugal. Staying there was an amazing feeling and it became more realistic to me that I will walk this way someday. For the moment it was more than enough to see this rocket. I took many great memories, feelings and experiences with me back home. I didn’t complain about any stupid bullshit, I’ve always been in a good mood and I learned to stay patient and grateful. These things helped me a lot to calm my character. I have to admit that until this trip some years ago I might have had some strikes of an overdramatic princess. I also learned to always treat the people around you good and if you have any issues just walk away and deal with it until you are ready again to face it calmly and friendly.

This trip taught me gratitude and humbleness.  I think these are some important personal qualities in order to have a positive and enriching life.

© 2020 Thank you for visiting www.madeleine-afsali.com